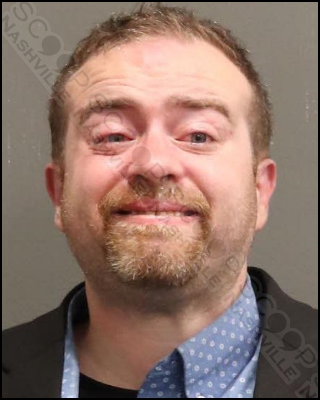 37-year-old Jason Lind, who we covered last week after his outburst at Best Buy, is now being held on a federal warrant in the Metro Nashville Jail, after he called the FBI and told them he had sold his soul to Luke Bryan and would commit treason for him, including getting on a plane and carrying out a specific threat to President Joe Biden. He explained he was simply waiting on Luke Bryan to give him the orders.

Agents from the United States Secret Service say Jason Lind called the FBI’s National Threat Center on December 4th and threatened the life of the President of the United States of America. Lind told them “I’m standing looking at Nissan Stadium and I’m wearing a black suit with black shoes, a gray button-up shirt, and Prada glasses. He told the operator that he was calling to inform them of a future crime he was going to commit and that he planned to kill President Joe Buden and the FBI Director. He explained that he was about to max out his father’s credit cards, which had about a $30,000 limit.

Lind told the operator “I just sold my soul to Luke Bryan… I told him I will commit treason for him… I told him that it goes up to including with me flying to D.C. tonight, putting a bullet in Biden’s head, and dying.” He continued: “If you do not get me an agent, in person, right now with a plan, the next time I’m in D.C. I’m walking up to the Director of the FBI and putting a bullet in his head, in public. You understand?” LIND stated that he swore on the Constitution of the United States to that statement, and then said, “that’s a done deal.” Towards the end of the call, LIND reiterated that: “At the end of the day, I’m threatening the President’s life and the Director of the FBI’s life.” LIND then concluded by saying: “I’m serious, you don’t do this I’m hopping on a plane to D.C. as soon as I can, I’m buying a gun, I’m gonna hunt down the Director of the FBI and I’m gonna put a bullet in his head…”

Agents learned that Lind had been arrested just days prior on November 30th wearing the same outfit he described himself to be in, as confirmed by the mugshot from that arrest. District Attorney decided to not prosecute for the disorderly conduct charge he was arrested for, involving a transaction at a Best Buy store, and he was released from custody the following day.

On December 5th, Lind would again be taken into custody by Metro Nashville Police, this time due to his outbursts and disorderly conduct at a downtown Nashville Hotel. When the Secret Service was alerted to his custody status, they came to the jail for an interview, during which Lind explained that he would simply “shoot Biden if Luke Bryan asks”. Lind stated he does “not have any plans to go to the White House and hurt Biden, unless Luke Bryan tells him to.” Lind also explained he knew the White House Communications phone number from memory and would “troll” their phone lines. He also noted that the Milwaukee Police Department, where he lived previously, considered him to be homicidal. That department had alerted federal authorities of his actions in years past.

When Lind found out that he would be staying in custody of the Davidson County Sheriff’s Department, as he was still facing charges here for the downtown hotel incident, he became upset, as described by the agents:

At the conclusion of the interview, LIND became upset that he was staying in local custody. LIND asked SA Anger and I to transfer LIND into federal custody. When we attempted to explain the process, LIND began raising his voice and stated the following: “When
I am released from local custody I will fly to D.C. and kill Biden.” SA Anger explained to LIND the repercussions of making such a statement, to which LIND said the following: “I will fly to DC and do what needs to be done.” This last outburst from LIND was of particular interest to us as LIND was standing straight, he enunciated the threat clearer than any other statement made during the interview, and he maintained eye contact throughout each threat.

Lind remains jailed as of publication and has recently rescinded his opposition to being held locally while awaiting trial.