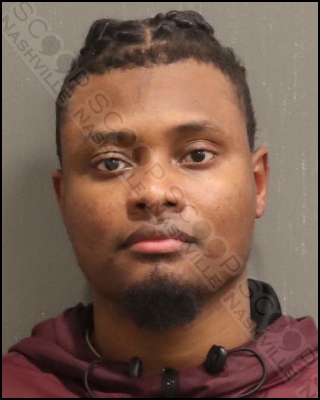 26-year-old Jamal Nobrega, who is known in the underground car racing scene across the U.S. & Mexico, took multiple mid-state agencies on a chase overnight, with speeds reaching over 170 mph. Metro Nashville Police initially observed the 2020 Chevrolet Camero on I-65 N bearing a non-legal license with just ‘LTX’ printed on the plate in red and white lettering. The passenger side of the car was distinct with vinyl lettering of “ITSJAMAL__” on the window. After being initially paced at 85 in a 70 mph zone a traffic stop was attempted, however, the driver fled at high rates of speed. MNPD AirOne and a THP helicopter picked up the pursuit, observing the vehicle ‘blacked out’ several times (turned off all lights) in an attempt to avoid being tracked. Eventually, the driver was taken into custody in Sumner County and transported back to Nashville. When asked why he eventually stopped the chase, Jamal Nobrega replied “because I ran out of gas”. After being charged with reckless driving and felony evading arrest, he was sent home on pre-trial release.

We reached out to Jamal for comment, and he blocked us from his social media accounts.