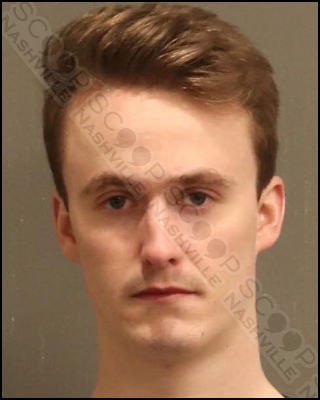 23-year-old Bohlt Hamrick told police he had around 5 drinks at a #DowntownNashville bar Wednesday night, a mix of both beer and liquor, before he began the drive home. Police and medics would find him extremely intoxicated in a crashed car on Riverbank Drive, where a home security camera captured him speeding down Stone Hall Blvd, striking a curb, and coming to rest in the intersection. He told police he “was just driving home” in the neighborhood, however, he lives in a neighborhood approximately 8 miles away. After field sobriety tests, Hamrick submitted to a breathalyzer, where he blew a 0.166 BAC – over double the legal limit. He was booked into the Metro Nashville Jail, charged with DUI / driving under the influence. He is free on pre-trial release.