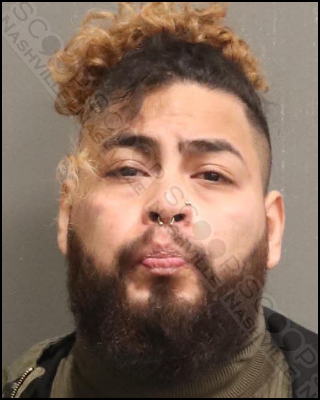 When 25-year-old Jaime Aquino was jailed this week for an assault on his co-worker when he smashed a glass mug over his head, he was also served with an outstanding warrant from March, charging him with the domestic assault of his girlfriend, which left her with severe injuries. Court records show Aquino came home at 4 a.m. and wanted to have sex, however, Kirsten Brasher told him no. Upset at the denial, he reportedly picked up a blowtorch and began to wave it around at her in a threatening manner. He then grabbed the victim and tossed her around the apartment, then hit her with several full mason jars, breaking them on her head, causing a 2-inch gash. The victim was able to knock over a television to distract him in order to escape. A commissioner set his bond for this charge, domestic assault with bodily injury, at $5,000, which he posted.