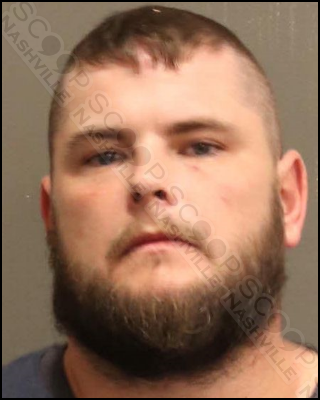 32-year-old David Phillip Messick, who was visiting Music City from Georgia, was booked into the Metro Nashville Jail after officers say he caused quite the disturbance at the Capitol Hotel in downtown Nashville. Management initially called police after he became extremely intoxicated and attempted to fight staff members. Officer arrived to find him yelling and screaming at staff and other patrons. As officers approached he wanted them to “don’t walk up on me!” and squared up with them while balling up his fists. Unimpressed with his chances at winning a fight, offices took Messick into custody against his will, while he kicked, screamed, pulled away from, and threatened violence toward, officers. Once in the patrol car, he had to be hobbled as he kept attempting to know out the windows of the unit. Messick is charged with resisting arrest, disorderly conduct, and public intoxication. He is free on a $2,000 bond.