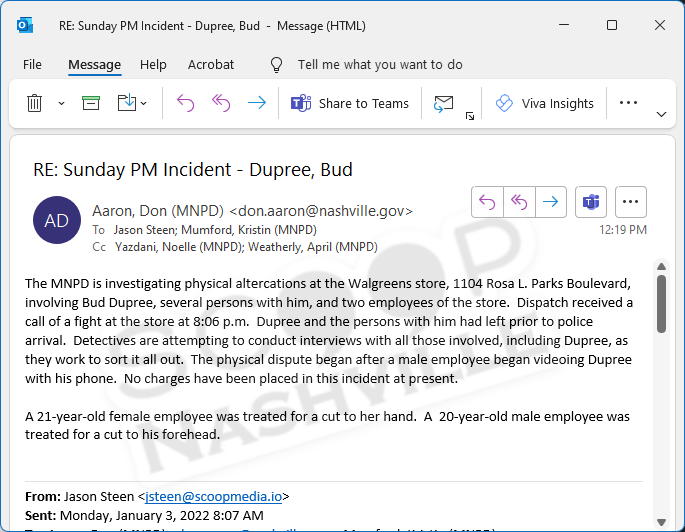 A spokesperson for the Metro Nashville Police department confirms they are investigating Alvin ‘Bud’ Dupree, of the Tennessee Titans, along with several associates, for an assault that occurred at a North Nashville Walgreens just after 8 p.m. Sunday. The department says a 21-year-old female employee and a 20-year-old male employee bother suffered injuries. Detectives are attempting to conduct interviews with all involved, including Dupree. The assault reportedly began after the male employee began recording Dupree with his phone.

A statement from the department is below:

The MNPD is investigating physical altercations at the Walgreens store, 1104 Rosa L. Parks Boulevard, involving Bud Dupree, several persons with him, and two employees of the store.  Dispatch received a call of a fight at the store at 8:06 p.m.  Dupree and the persons with him had left prior to police arrival.  Detectives are attempting to conduct interviews with all those involved, including Dupree, as they work to sort it all out.  The physical dispute began after a male employee began videoing Dupree with his phone.  No charges have been placed in this incident at present.
A 21-year-old female employee was treated for a cut to her hand.  A  20-year-old male employee was treated for a cut to his forehead.

This is a developing story.