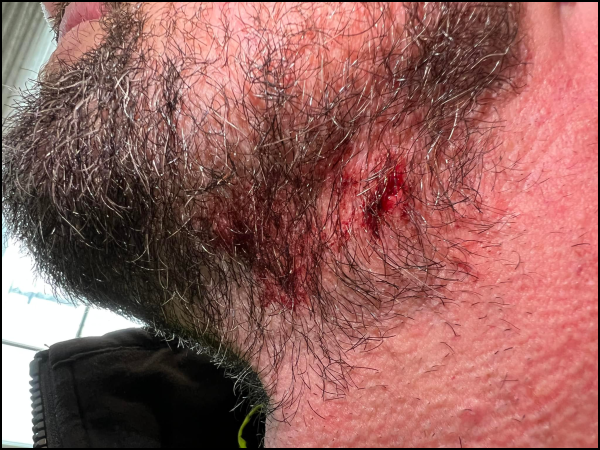 You won’t’ find a lot of unearned accolades for MNPD from this outlet, however, there are individuals within the department who carry out amazing work for the city on a daily basis. You would be hard-pressed to find anyone, even those he’s arrested and jailed, to say a bad word about Downtown Officer Sean ‘Spyder’ Pulizzano – he’s one of the true good “good guys” in Nashville. You also wouldn’t suspect the tall and lanky middle-aged man who has been with the department for nearly two decades was a local MMA legend as he rides his bicycle on-duty for Central Precinct. That’s part of what makes it even more surprising that a suspect got the best of him this week, stabbing him with an ink pen, leaving a deep puncture wound just an inch from his carotid artery.

That history was why this story caught our attention. On Thursday, Officer Pullizzano was helping with the extraordinary call volume due to the snow when he and Officer Clint Gilleland encountered 40-year-old Johnny Hayes, Jr., who was causing a disturbance and refusing to leave the Hampton Inn on 11th Ave N. in downtown Nashville.

Officer Gilleland offered Hayes a ride to a warming shelter multiple times, and told him he was free to go as long as he left the lobby of the hotel, however, Hayes refused to leave and stated he did not want to go to the Rescue Mission. He explained the only other option was jail, and how unnecessary that would be. As Hayes continued to refuse, Gilleland called for backup and Sean ‘Spyder’ Pulizzano arrived.

As you can see in the social media post from Officer Pulizzano, it was eventually decided the incident had gone on long enough and Hayes refused all available options once again. As they were placing him into custody for criminal trespass, Pulizzano grabbed Haye’s wrist at which time Hayes stood up and began to “viciously attack” the side of Pulizzano’s face with an ink pen. Hayes was eventually tased in the left buttocks, allowing him to be handcuffed. The injury received by Pulizzano is described as a puncture wound one inch away from his carotid artery.

Pulizzano posted that he knew the man had the pen, and it was in his hand during their entire interaction, however, he became complacent and didn’t think to disarm Hayes before placing him into custody – a mistake he says he’s learned a valuable lesson from. He posted the story on social media to remind other officers to not make the same mistake.

Johnny Hayes was booked into the Metro Nashville Jail, charged with felony aggravated assault on a first responder, criminal trespass, and resisting arrest. His bond is set at $26,500. Hayes has a prior 2005 arrest for assault and vandalism for which he received mental health treatment and probation. His booking photo was not immediately available.

Working the beat yesterday during the snow event calls were backing up with every precinct. Many of us were picking up calls to help with the call volume. Clint picked a call up where an individual was not wanting to leave a hotel and after talking to the individual for brief time he called for backup and I went to back him up on the individual. Clint build a little rapport with him, but do to his mental status he was not making any sense we were going to have place him in custody for criminal trespass. The staff didn’t want him on their property.

He had a pen in his right hand the whole time while he was sitting talking to us in a chair, but I got complacent on not thinking to disarm him prior to placing him in custody. When I grabbed his left arm he hit me several times in the head with what I thought was a closed fist, but found he was stabbing me in the neck. We both fell backwards to the ground and I fell top crossbody and Clint was able grab his lower body and deploy the Tazer and together we were able to get him in custody.

I thank God that he didn’t puncture the carotid arteries or my eyes during his barrage of strikes to my face. The moral of this event is that I learned and took a very valuable lesson that almost took my life yesterday and I’m posting this to make sure other officers don’t make the mistake I made yesterday not thinking everything through. Godspeed Brothers!!