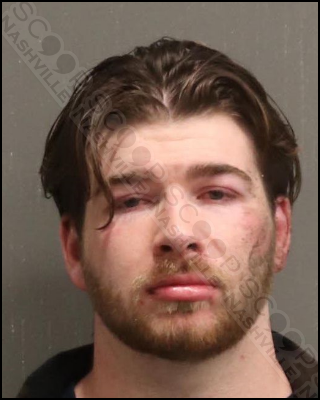 Metro Nashville Police offices say they repeatedly pleaded with 24-year-old Connor Lee Brink-Sawyer to go on about his night after he was kicked out of Kid Rock’s bar in downtown Nashville for fighting inside the venue. Brink-Sawyer repeatedly tried to re-enter the bar and was extremely intoxicated. Despite attempts to let him walk away, he became aggressive toward officers, resulting in his initial arrest for public intoxication. As an officer began to take him into custody for a charge he would have walked away from after a sobering-up period, Brink-Sawyer began to swing his fists at officers, he landed a punch on the face of Officer Michael Jason Leon Hones. Brink-Sawyer was transported to the Metro Nashville Jail, where he was charged with public intoxication, disorderly conduct, resisting arrest, and assault of an officer. Connor Brink-Sawyer, who is from Modesto, CA, is free on pre-trial release.