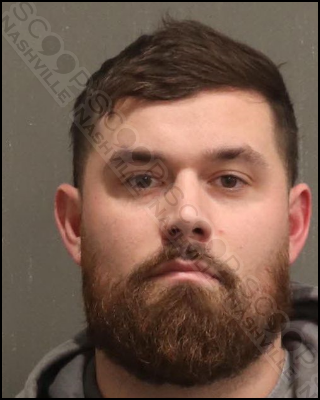 25-year-old musician Connor Lee Hicks [IG: @connorhicksmusic] was booked into the Metro Nashville Jail Thursday night on an outstanding felony warrant charging him with aggravated assault of his wife, Marissa Williams, leaving her with serious bodily injury. He reportedly headbutted her so hard during an argument she required extensive surgery to repair the damage.

The warrant, which was signed on November 30th, alleges that the couple (who has a YouTube series based on their relationship) was out at a downtown bar and at around 1 a.m. Marissa attempted to take an Uber home to get away from the verbal argument they were having. As she was leaving, Connor insisted on accompanying her in the Uber and reportedly yelled at her during the entire ride.

Once home, Marissa went to walk the dog when Connor reportedly pushed her to the ground, and as she stood back up he headbutted her in the face with such force it caused her to have a deviated septum and excessive blood, and long-term issues with breathing, which required surgery to repair. Police retained photographs of the injuries and bruising which resulted from the assault.

Connor Lee Hicks was arrested on the outstanding felony warrant and booked into the Metro Nashville Jail on November 13th, formally charged with aggravated assault with serious bodily injury. He is free on a $5,000 bond to his 600 Broadway address.