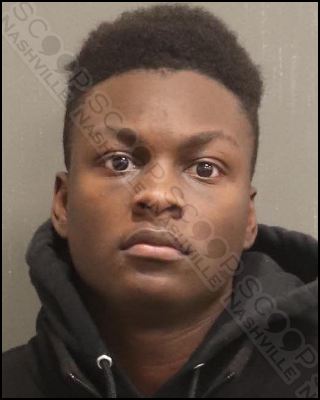 19-year-old Te’Quan is charged with possession of brass knuckles, vandalism, interference with a 911 call, and domestic assault, after his ex-girlfriend, Johnyae Hooten, says he punched her in the face, raped her, and smashed her phone when she attempted to call 911 to report it. Cartwright is free on a $5,000 bond.

Court documents state the couple was no longer together, however, the victim invited Te’Quan over and they were laying on the bed when he became upset over a joke in a group chate they are both a part of. She says he then stood up and smacked her in the cheek, punched her in the mouth and stomach, then took her to the ground and forced himself upon and inside her.

She says after the rape she attempted to call the police, however, he grabbed her phone and threw it across the parking lot, damaging it, then tossing her laptop, too. As she went to the kitchen to get a knife for self-defense, he grabbed the knife and broke it. She was able to call a friend using an Alexa speaker, who then called 911 for her.

Te’Quan told police the sex was consensual and states that after they had consensual sex he noticed she was messaging another man, which angered him, and admitted to breaking the phone and laptop. During a search of his person during arrest, officers located brass knuckles in his backpack, which he was wearing.

He was not charged with rape, however, he was jailed on charges of domestic assault, vandalism, interference with a 911 call, and possession of a prohibited weapon. He is free on a $5,000 bond.