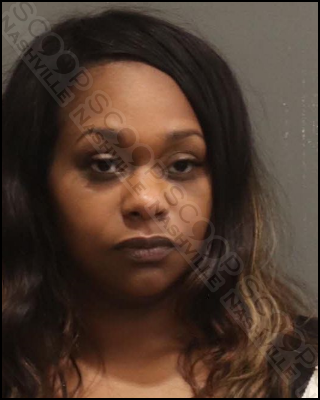 When Police found 34-year-old Bria Brooks wrecked into a fence near the airport on Murfreesboro Pike at 4:30 a.m. Sunday, she wasn’t sure what had happened, where she had been, where she was going and insisted her credit card was her identification. Brooks admitted to drinking “a little” according to an arrest warrant.

Police say it was apparent she was originally headed outbound on Murfreesboro Pike and crossed three lanes of inbound traffic before crashing into the airport fence. She refused field sobriety tests and requests for blood/breath samples.

Bria Brooks, of 810 Bellevue Road, was booked into the Metro Nashville Jail at 5:50 a.m. Sunday, charged with DUI and violation of the implied consent law. She is free on pre-trial release.