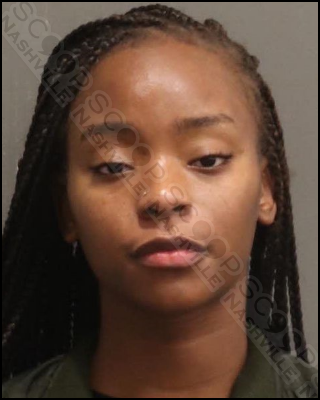 While responding to a different call, officers discovered 21-year-old Kayla Knox stepping out of her wrecked vehicle in the median of I-40. She told officers she had just left Play Dance Bar where she drank shots and was trying to get home to Clarksville. She refused to remove her heels and performed field sobriety tests wearing them. She was charged with DUI.

Officers say Knox told them she was about to get hit head-on by a tractor-trailer and the only way to avoid it was to swerve, which is how she ended up in the media. Officers looked at her tire tracks, which actually came from the opposite direction from the direction she claimed t be traveling. After performing poorly on field sobriety tests and refusing all blood and alcohol tests, she was determined to be driving under the influence and was transported to booking.

Kayla Jadan Knox, of 3193 Fort Cambell Blvd in Clarksville, was charged with DUI and violation of the implied consent law. She is free on pre-trial release.