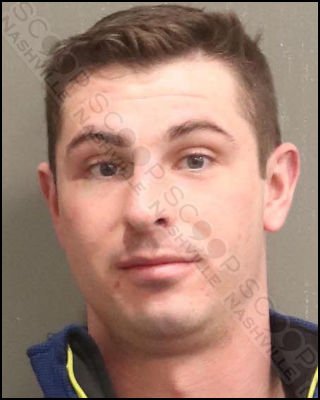 27-year-old tourist Kyle Maike, from Idaho, was charged with domestic assault with bodily injury at a Nashville Hotel this weekend after police say he put his hands on his girlfriend, Ashleigh Woods, as they were coming back to the hotel from a bar. He reportedly pinned her against a wall, ripped the phone cord from the wall, and left her jacket bloody and torn from a struggle. Maike is free on a $1,000 cash bond.

Metro Police were responding to 2511 Elm Hill Pike on Sunday for a domestic disturbance call from the victim, who stated her boyfriend, Kyle Maike, was now leaving the scene in his vehicle. Police intercepted his vehicle nearby and detained him. She explained they were returning back from drinking at a bar and got into an altercation during the ride, in which he put his hands on her in the vehicle.

Once back inside the hotel, the argument escalated and he reportedly pushed and shoved her first against the vehicle, and then against the wall of the hotel room once inside. As she attempted to call police, she says he ripped the phone cord from the wall, and out of her hands. Police found her jacket bloody and torn from the assault.

Maike had some injuries on his face, which police say were inflicted as a result of self-defense from the victim. Kyle Maike, of 573 South Curtis Road, Boise ID, was booked into the Metro Nashville Jail, and charged with domestic assault with bodily injury. He is free on a $1,000 cash bond.