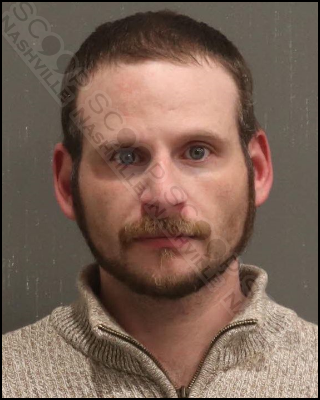 34-year-old Nicholas Mongello is charged with theft and burglary after Play Dance Bar posted an image of a man who tore down a brick wall under construction and stole two ipads on their social media, and Mongello’s ex-boyfriend, Josh Lancaster recognized him from both a tattoo and his stance.

Todd Roman, an owner of Play, says after Lancaster contacted him he was able to confirm the identity using social media photos for comparison. Todd called Mongello and recorded the conversation during which he says he did not remember how he got into the location, but does remember that he woke up inside and remembers being “lost and confused” for a while.

Nicholas Joseph Mongello (husbear_87) is charged with theft and burglary, and was booked into the Metro Nashville Jail on January 14th. He is free on a $10,000 bond to his address at 870 Snow Hill Road in Dowelltown, TN.