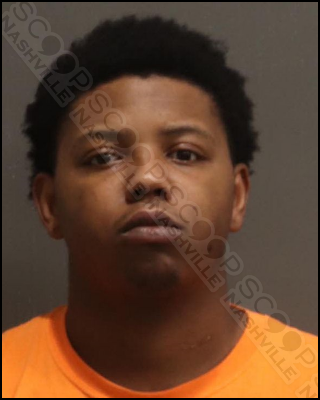 Metro Nashville Police say 21-year-old Perry Reed shot and killed his girlfriend’s dog inside her apartment overnight. He is charged with animal cruelty, reckless endangerment, and possession of marijuana. He is jailed in lieu of an $18,000 bond.

Early Friday morning, police responded to a call for service where they found Perry Reed had pulled a Smith & Wesson revolver, pointed it at dog inside the apartment where other people were, and fired it, killing the dog. His girlfriend, Alexis Patterson, told police he had been making suicidal statements, and police confirm that upon first encountering him, he made a gesture to his right temple with his fingers and asked them to shoot him.

During questioning, Reed asked for some pants, and officers gained permission to enter the residence. Once inside they noticed 4.8 grams of marijuana on the kitchen table and determined it belonged to Reed.