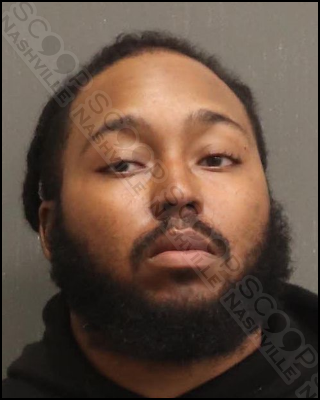 NEW DETAILS: 25-year-old Adarius Frazier, 31-year-old Ralphael Turner, and an unknown third person, held a resident at gunpoint as he arrived home from the 3000 Bar in downtown Nashville and demanded access to the apartment. Once inside, all three residents, Anthony Holmes, Capria Holmes, and Francesca Clark, were zip-tied and placed on the floor of a bedroom closet. The invaders also knocked out the front teeth of Mr. Holmes. As officers were putting on heavy armor outside, the suspects fled in a resident’s vehicle… police eventually caught 2 of them on Lischey Ave. as they dumped an AR Rifle, a Keltec pistol, and iPhones along the way. Frazier is held on a $387,000 bond, and Turner is held on a $270,000 bond.

On 01/22/2022 at approximately 0345 hours, officers responded to 2001 Riverchase Blvd. for a possible burglary. Victim #1, Francesca Clark, called police stating a male was attempting to force his way into her apartment with a gun. Ms. Clark then advised she is hiding in the closet and believes “they got in and are now in the garage”.

Madison C detail Sergeant Mathes arrived on the scene and determined the call to be a barricaded suspect. Officers began to put on their level III heavy plates. While prepping, the garage door to the apartment opened and a black Jeep sped out of the garage. The Jeep, while fleeing, drove into the path of two officers who had to quickly move out of the way to avoid being run over.  Two different officers then began to pursue the fleeing vehicle.

Officers continued to pursue the vehicle until the vehicle stopped behind 1225 Lischey Ave, and three suspects exited the vehicle and fled on foot. Utilizing officers and a K-9, suspect #1 was located at 1216 Lischey Ave without incident.

Suspect #2 was located at 1300 Lischey Ave. Suspect #3 was not located and is still outstanding. Officers located an iPhone, an AR rifle and magazine, and a Keltec pistol in the vicinity. CID was paged out and arrived on the scene. CID collected and submitted all seized property, and processed the vehicle.

The two officers who remained at 2001 Riverchase Blvd, and Sergeant Mathes, proceeded to clear the residence after the Jeep fled from the scene. No other suspects were found inside the residence. Officers found three victims laying on the floor of the master bedroom closet, with their hands bound behind their backs with multiple black zip ties.

Officers then interviewed the victims. Ms. Clark stated she was home at 2001 Riverchase Blvd while Mr. Holmes and Ms. Holmes were out at the 3000 Bar at 1516 Demonbreun St. She stated Mr. Holmes told her they were on the way back to 2001 Riverchase Blvd. At approximately 0345 hours, Ms. Clark received a video notification from her ring doorbell camera. She could see Mr. Holmes walking to the door with a masked individual walking behind him with a pistol.

Ms. Clark immediately hid in the closet of her master bedroom and called 911. While on the phone with 911, she told the dispatcher she could not talk much due to believing the suspects were inside of her apartment, possibly in the garage. Ms. Clark stated the suspects then entered the closet, turned on the light, and discovered her. She stated she believes all suspects were male blacks based on their voices.

Ms. Clark stated the suspects then began rummaging around the apartment, touching their cell phones. Shortly afterward, all parties could hear MNPD knocking on the front door. Miss Clark stated to the others that the police were there. All suspects then began pacing back and forth attempting to decide what to do next. The suspects then demanded Ms. Clark’s keys. Ms. Clark told them where her keys were. Afterward, the suspect stole the victim’s keys to the jeep and also took the keys to the Acura which were found on his person when he was taken into custody.

Mr. Holmes and Ms. Holmes stated that they were out drinking at the 3000 bar downtown. Afterward, they proceeded to a White Castle restaurant at 1404 Broadway. Afterward, they drove to 2001 Riverchase Blvd. Both stated when they parked, the suspects were already standing outside of a nearby vehicle (later identified as the defendant’s vehicle).

Ms. Clark showed officers a short surveillance video from her ring camera. This video showed one of the suspects walking behind Mr. Holmes with an object in his hand, before striking and breaking the camera. The victim’s vehicle was also damaged above the threshold during the aggravated assault against the two police officers as it crashed through some small trees and bushes.