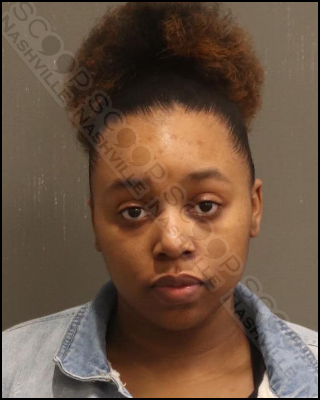 Police say 19-year-old Imani Nixon and her boyfriend, Kaveion McKissack, ended their relationship several days ago, and she had not returned to their shared apartment since. On January 22nd, Nixon returned to find another Kaveion and a female friend, Alex Mitchell, asleep in the bedroom She assaulted him, leaving his face swollen and scratches and marks on his face, chest, and shoulder. She then tossed a box fan into his television, and tossed his Xbox from the second-floor apartment, down onto the ground, destroying it. Nixon is free on a $2,000 bond.

Imani A. Nixon is charged with domestic assault with bodily injury and vandalism, and was booked into custody mid-day on January 24th. She is free on a $2,000 bond, to her 3833 Clifton Avenue address in Nashville.