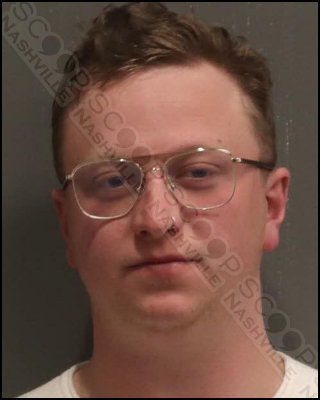 25-year-old Alexandre Drolet Pollock told police “you can’t arrest me, I’m French Canadian” when he was found stumbling around downtown Nashville pulling on door handles of parked cars while slurring both his English and French when he asked to be left on the street to “sleep it off”. Metro Nashville Police understood the assignment.

Downtown officers responded to 5th & Demonbreun on a report of a highly intoxicated individual, later identified as Alexandre Drolet Pollock. Officers observed him stumbling around, unsteady on his feet, and attempting to pull on door handles of vehicles. He reportedly slurred his speech, which swapped from English to French during the conversation. Pollock told officers he couldn’t be arrested, since he was French Canadian, and asked officers to just let him “sleep it off” on the street.

Alexandre Drolet Pollock, 25, was booked into the Metro Nashville Jail and charged with public intoxication and disorderly conduct. He posted a $1,000 bond and was released to his 1500 Bd Guillaume-Couture address in Lévis, Quebec, Canada.