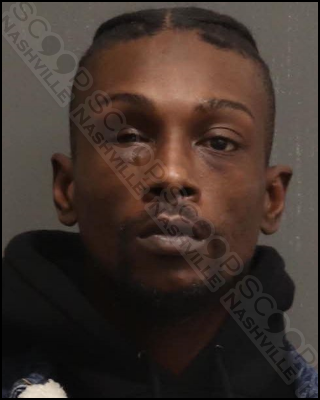 32-year-old Khiry Crowder was booked into the Metro Nashville Jail Wednesday on two outstanding warrants stemming from an October incident in which police say he threw a brick at his boyfriend, Haikim Shruggs, but missed, and it struck the boyfriend’s work vehicle instead. Crowder is charged with felony aggravated assault with a deadly weapon and vandalism.

Police say the incident happened on October 29th, 2021, with just after 8 a.m. they were dispatched to Mercury Court Apartments where the victim explained the couple had been in an argument the night before about his phone ringing, he stated Khiry was “always jealous and causes fights” but this one turned physical. Officers observed scratches on the victim’s face and neck.

The victim’s work vehicle was also damaged when Khiry threw a brick at him and hit the vehicle. Khiry Montaze Crowder was booked into the Metro Nashville jail and charged with vandalism and felony aggravated assault with a deadly weapon. He is free on an $11,000 bond to his 411 Murfreesboro Pike address in Nashville.