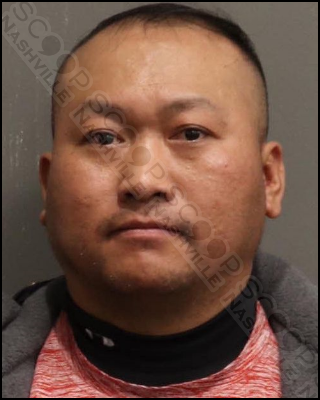 Metro Police responded to Raywood Lane after a citizen called in to report a car with a person inside had been parked in front of their home for several hours. Police identified 35-year-old Do Thang inside the vehicle with the keys in the ignition, his belt undone, and his pants unzipped. Officer reported he had snot running down his face and was extremely intoxicated with three open Clubtails Sunny Margarita Cans visible in the car.

Do T. Thang was booked into the Metro Nashville Jail late Monday night, and charged with driving under the influence, violation of the implied consent law, and open container. His bond was set at $1,500.