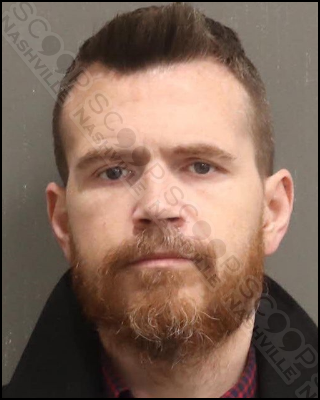 Police say Jeremy Bauer told his boyfriend, 40-year-old Brett Finch, to “go to bed and stop arguing” after dinner and drinks. That’s when Bauer says Finch struck him in the face, causing a laceration to his lip. Police responded to the scene, and documented visible scratches on the victim’s neck and discovered a cracked screen on the victim’s phone, which Brett reportedly threw to the ground. Police issued two warrants for the arrest of Finch, as he had already fled the scene, and he was booked into the Metro Jail this week.

Brett C. Finch was booked into the Metro Nashville Jail on January 29th, charged with vandalism and domestic assault with bodily injury. He is free on a $1,500 bond and was released to his 301 22nd Ave N. address in Nashville.