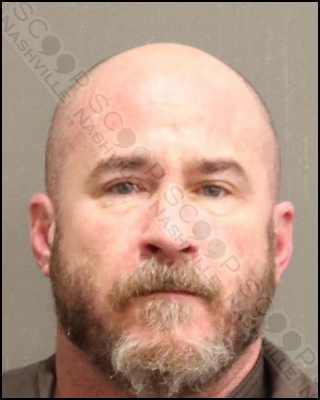 While locals may be oblivious, #VisitMusicCity tourists to Nashville have a longstanding #FindTheCowboy game in which they attempted to find a particular ‘cowboy’ who has been the center of sexy calendars, thousands of tourist photos, and is more locally known as the doorman at Layla’s in downtown Nashville. That cowboy is 46-year-old Benjamin Colby Barrett, and he was arrested in Nashville Friday night, charged with the felony aggravated assault of a former lover who has an active order of protection against him.

Amy Ruth Hopkins says that on January 30th, Benjamin Colby Barrett grabbed her head and punched her in the back of the head, resulting in swelling of her head and an injury to her right eye. She came to the Family Safety Center hours after the incident to report it, and her injures were documented. She also confirmed she has an active Order of Protection against Barrett, out of Georgia, which was confirmed. Police also confirmed that Barrett had been contacting her, in defiance of the order, and issued warrants for his arrest.

Benjamin Colby Barrett, better known as “The Nashville Cowboy” was booked into the Metro Nashville Jail on the outstanding warrants Friday Night, 02/04/2022. He is charged with violation of an order of protection, and felony aggravated assault. He posted a $20,000 bond and was released to his 500 5th Ave N. address in Nashville.