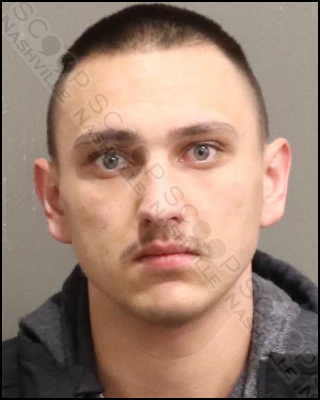 Police say Dakota Cummingham and Alex Morton Oneal admit to driving by a car meet of “street racers” on February 4th and holding a pair of rubber testicles toward the people in the crowd while yelling “this meet sucks” and “suck my truck nuts”. They say a red Camero pulled up to them and three males exited the car with guns pointed at them while the driver of the Camero pulled a handgun and chambered a round while telling them they were going to die that day. Police located the vehicle, with the driver, 20-year-old Tyler Cobb, still inside, two blocks away and took him into custody. Cobb also had an outstanding warrant from two weeks prior when he vandalized a car that stopped to take photos of him doing donuts in the middle of the roadway.

Tyler Cobb was booked into the Metro Nashville Jail on 02/05/2022, charged with two counts of aggravated assault with a deadly weapon, and the outstanding vandalism warrant. After a bond review hearing, his bond was reduced to $55,000, which he posted. He was released to his 422 Lilly Lane Address in Murfreesboro, TN.