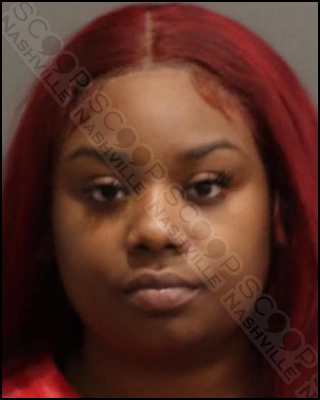 Metro Police say Jacques Jamar Smith called police after his girlfriend, 26-year-old Taquisha Burt, observed a SnapChat message pop up on his phone inside their Hickory Highlands apartment. She then threw a lotion bottle at him before running toward him, attacking him, leaving scratch marks on his back. He attempted to go outside and de-escalate the situation, however, Burt was not open to that option. Video footage corroborated the assault.

Taquisha Burt was booked into the Metro Nashville Jail on 02/10/2022, charged with domestic assault with bodily injury. She is free on a $1,500 bond and was released to her208 hickory Highlands Drive address in Antioch.