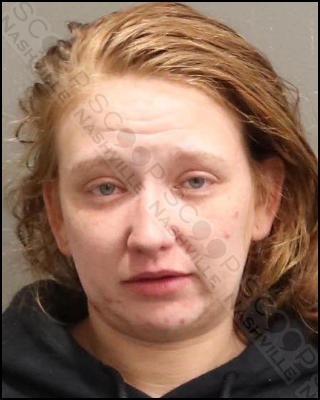 Dylan Davis says the mother of his child, 29-year-old Hailey Rigsby, was attempting to start a verbal argument, however, he refused to respond or give her a reaction, so she began to grab at him in an aggressive manner. In order to prevent her from injuring him, he says he wrapped his arms around her in a burrito-style hold and she bit him on the arm. She then moved around and threw a drawerful of knives and forks at him, and used a knife to cut him on the face. She was charged with aggravated assault with a deadly weapon, and police documented multiple injures, including a bite mark, on the victim.

Hailey Rigsby was booked into the Metro Nashville Jail on February 19th, charged with aggravated assault with a deadly weapon. She is free on a $3,000 bond, released to her 408 Cleves Street address in Old Hickory.