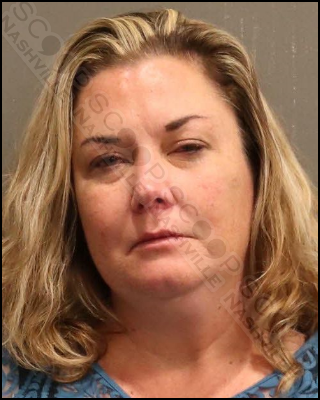 Police say 42-year-old Tammera Lee drove her vehicle into a secured DCSO facility parking lot behind a staff member on S. 5th Street. Police were alerted when the unknown woman appeared to be heavily intoxicated. Officer Ronald Conner responded and Lee admitted to drinking prior to driving and responded with a “Fuck You!” when asked to perform field sobriety tests. She continued to be belligerent with the officer as he noticed several alcoholic beverages in plain sight within her vehicle. As she was informed she was being arrested for DUI, she replied “I’ll get away with it cause I’m white” according to the arrest report.

Tammera Megan Lee was booked into the Metro Nashville Jail on February 20th, charged with driving under the influence (DUI) and violation of the implied consent law. She is free on pre-trial release to her 2302 Woodmont Blvd address in Nashville.