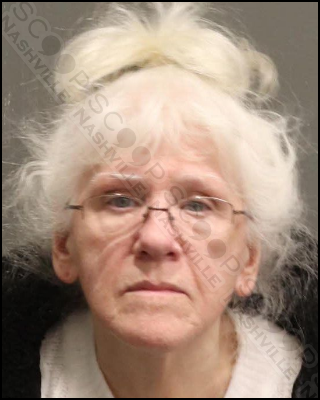 75-year-old Linda Jones, who carries a homemade shield crafted from the same aluminum foil that lines the interior of her car, was jailed Thursday after she failed to appear on a citation charging her with vandalism. She believes that voices, which were reported at different times to be the voice of the property manager or the Nashville Chief of Police, had told her to destroy her neighbor’s ring doorbell, and at a later time, to kill them. She succeeded in destroying the Ring video doorbell camera, admitting to police she used her cane.

Linda Jones was booked into the Metro Nashville Jail on February 24, charged with vandalism. She is free on pre-trial release to her 555 N. DuPont Ave address in Madison.