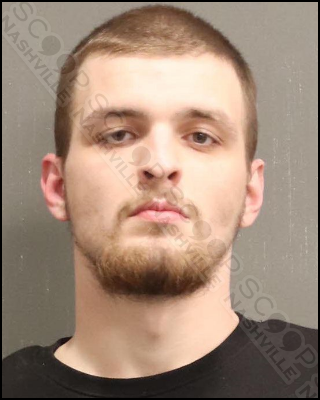 24-year-old Clayton Phifer and his wife were DoorDashing and had an order to pick up alcohol from a Berry Hill liquor store. When neither was able to produce ID to verify their age, they were denied the alcohol. After some back and forth, the store informed Clayton he was no longer welcome, and Clayton became irate and went outside only to return back inside with his wife. The clerk felt threatened and grabbed a bottle of liquor in case he had to defend himself, at which time Clayton pulled out a pocket knife and stated “there’s gonna be a murder scene in here”. The clerk and the Clayton were chest-to-chest during parts of the altercation and intimidation.

Clayton M. Phifer was booked into the Metro Nashville Jail on February 24th, charged with aggravated assault with a deadly weapon. A commissioner set his bond at $10,000, which he posted the following day via 1st Stop Bonding. He was released to his 215 College Street address in Lebanon, TN