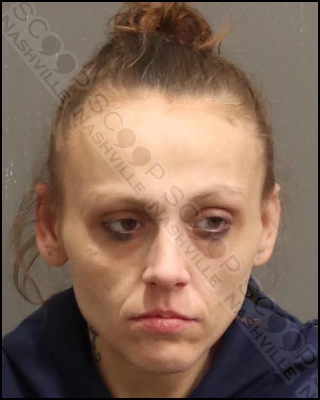 Nashville police conducted a sting operation this week, placing ads on skipthegames.com and meeting respondents at a hotel near Elliston Place & 24th Ave North. 33-year-old Kaetlin Blakeman responded to an ad and agreed to have sex with an undercover detective for $250 an hour. As she was taken into custody at the hotel police found heroin in her bra, and it was discovered she was HIV+, which she also admitted in an interview post-arrest. She was charged with felony aggravated prostitution due to her medical status. A commissioner set her bond at $26,000.

Kaetlin R. Blakeman was booked into the Metro Nashville Jail on February 23rd, charged with felony aggravated prostitution and drug possession. She remains jailed in lieu of a $26,000 bond.