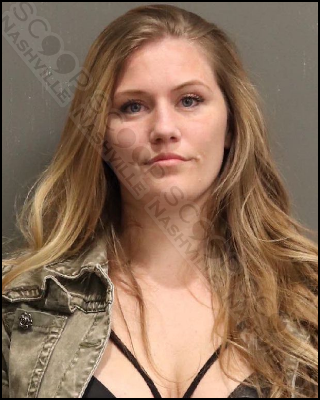 30-year-old Haley Michele Mikenas faces multiple charges after sideswiping a parked car on Demonbreun Street. Officer Joshua Spurlock observed the crash, in which Mikenas says someone waved her through a crowded parking lot and she “encountered a tight spot”. Police report she smelled of alcohol and performed poorly on field sobriety tests. As she arrived at booking, she had an outburst and yelled at a television which informed new arrestees of the booking procedures they were about to encounter.

Haley Michelle Mikenas was booked into the Metro Nashville Jail on February 27th, charged with driving under the influence (DUI), and violation of the implied consent law. She is free on pre-trial release to her 1103 Davidson Street address in Nashville.