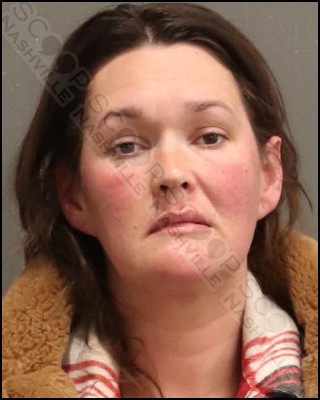 Nashville Police say 38-year-old Nashville Realtor Jeniste’ Bell was in an argument with her live-in ex-boyfriend, 37-year-old Matthew McKeon, when things got out of control Sunday. She asked him to leave their shared home and reportedly struck him in the back with a tire iron during an argument when he refused. He says she also fired a shot at him from her gun, and neighbors confirm hearing a gunshot. In response, McKeon reportedly broke several items in the home, hit her in the head with a metal bolt, and tossed a brick through the window of her GMC Yukon.

38-year-old Jeniste’ Bell is charged with aggravated assault with a deadly weapon and is free on a $10,000 bond to her 8345 Old Charlotte Pike address in Pegram, TN.

& 37-year-old Matthew McKeon is charged with vandalism and domestic assault. He is free on a $4,000 bond to his 8345 Old Charlotte Pike address in Pegram, TN