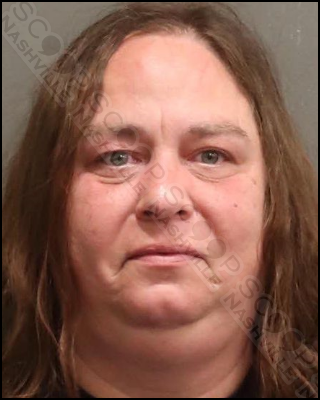 48-year-old Rebecca Oravec was involved in a non-injury crash on March 2nd, and police report her reeking of alcohol with pinpoint pupils, and slurred speech. She told responding officers she needed to be admitted to a rehab facility, stating she was an alcoholic. She admitted to consuming “a couple” of drinks. Inside the vehicle, officers located 9 open and empty cans of White Claw, and one unopened can which was still cold to the touch.

Rebecca Oravec was booked into the Metro Nashville Jail on March 2nd, charged with driving under the influence (DUI), violation of the implied consent law, and driving without a license. A commissioner set her bond at $3,000.