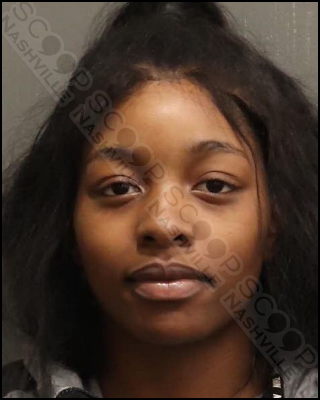 18-year-old Xania Huges was taken into custody on an assortment of felony and misdemeanor warrants stemming from a Christmas day incident. Police say her relationship with Rodney Douglas had ended in November, and on Christmas Day she wanted to retrieve her things from his home. He explained it wasn’t a good time, as he was with his current girlfriend, Jasmine Easley, for the holidays. Undeterred, Xiana showed up and became immediately irate, letting herself into the home via the back door, and walked in on the family opening gifts with children present. She destroyed the inside of the home, pulled her ex-boyfriend’s hair, punched him in his face and body, bit him on the bicep, and threatened him with a kitchen knife.

As Douglas and Easely pushed her out of the home, she began a second round of physical attacks. She then attacks them, their home, and their vehicle, with rocks and other objects. The vehicle suffered extensive damage to the windshield, mirrors, and body damage on all sides and panels. She then rips the mailbox off the base and tosses it at the home. She then got in her car to flee, but not before she attempted to drive into her ex-boyfriend using her car. Several neighbors recorded the entire incident on phones and doorbell cameras.

Xiana Danyelle Hughes was booked into the Metro Nashville Jail on March 2nd, charged with domestic assault with bodily injury, aggravated burglary, two counts of misdemeanor vandalism, mailbox tampering, two counts of aggravated assault with a deadly weapon, and felony vandalism. She is free on a $28,000 bond to her 216 E. 10th Street address in Trenton, TN.