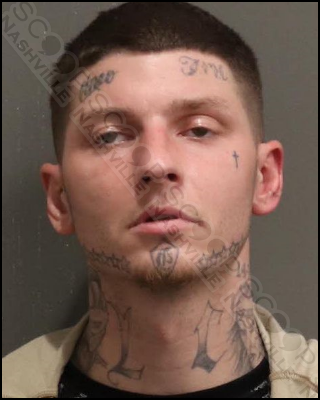 Nashville Police say 29-year-old Chase Tyler Koglin was trespassed from a Nashville Walmart on March 24, 2021. One year later, on March 3rd, 2022, Koglin was caught taking $35.44 worth of clothing into a dressing room and putting it on under his other clothing. Loss prevention contacted police who charged Koglin with felony burglary, due to being trespassed the year prior.

Chase Tyler Koglin was booked into the Metro Nashville Jail, charged with the current felony burglary, and outstanding warrants for criminal trespass and misdemeanor theft. He is free on a $5,000 bond to his 200 Nesbitt Lane address in Madison.