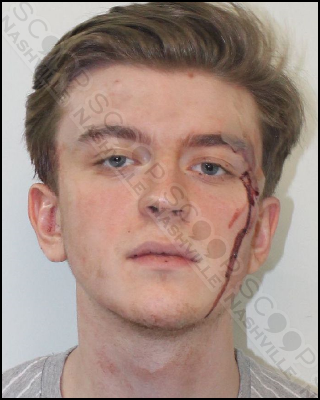 Motorcycle officer Hazzard observed 22-year-old Aaron Madura push his father on the sidewalk near 6th & Demonbreun in downtown Nashville. He turned his motorcycle around and followed behind the two, at which point he also observed Aaron slap his father, Frank Madura, in the back of the neck. As Hazzard was placing Madura into custody for domestic assault he says he “bucked up” on him to resist arrest after he was already in cuffs.

Aaron Madura was booked into the Metro Nashville Jail on March 5th, charged with domestic assault with bodily injury, and resisting arrest. He is free on a $2,000 cash bond to his 405 Cornelia Street address in Joliet, IL.