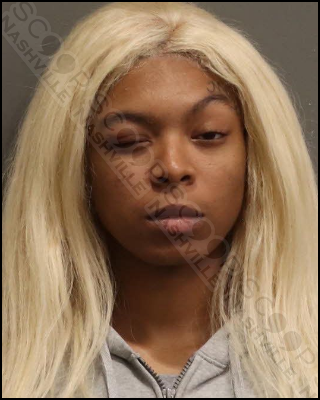 Jamaine Miller says he was in an argument with 19-year-old Jasmine Toler at Coleman Park and he got out of the vehicle. She warned him she was going to run over him, but he did not believe her. It was at that time, he realized the gravity of his underestimation of her intentions as she struck him at speed with her black Buick and he rolled over the hood and crashed to the ground as she fled and stashed the vehicle in Antioch before returning to her grandmother’s home. Miller stumbled to Nolensville Pike and contacted 911 with the help of a nearby citizen. Police found him freshly bruised with a large gash and bump on his head and abrasions on both legs. The victim was transported to the hospital.

Jasmine Toler was booked into the Metro Nashville Jail on March 5th, charged with felony aggravated assault with a deadly weapon. A commissioner set her bond at $10,000, which she later posted and was released to her 308 Hitsett Road address in Nashville.