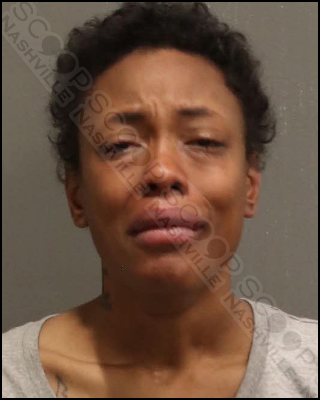 Charlie Tally says he was sitting in a vehicle on Phillips Street talking to some friends when 33-year-old Charity Patton suddenly poured gasoline on and around the vehicle he was in, lighting it on fire. The rear of the vehicle went up in flames. Officers located her in a nearby parked vehicle, where she was attempting to hide in the back seat. She was also covered in gasoline, as was the vehicle she was covered in. At the time of her arrest, she had an outstanding warrant from the night before, when she reportedly slashed her sister’s tires after she refused to give her money.

Charity D. Patton was booked into the Metro Nashville Jail on March 10th, charged with vandalism, assault of an officer (old case), and aggravated arson. A commissioner set her bond at $53,000.