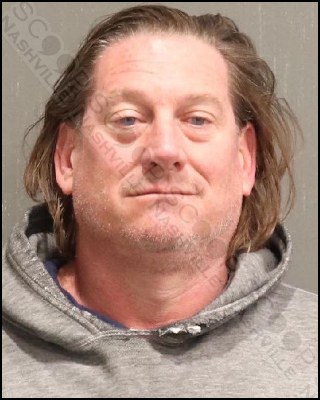 52-year-old Paul McGee reportedly came into his bedroom and pushed his wife, Sara McGee, onto the bed by her neck with one hand, then sat on top of her and began strangling her before letting go and walking out of the bedroom, leaving her with a sore throat and difficulty breathing. When police arrived and attempted to place him under arrest, he refused to stand up from his chair, and they have to remove him from his chair by force.

Paul K. McGee was booked into the Metro Nashville Jail on March 10th, charged with aggravated assault/strangulation and resisting arrest. A commissioner set his bond at $6,000, which he posted and was released to his 308 S. 7th Street address in East Nashville.