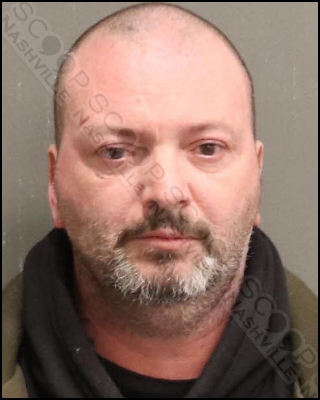 Nashville Police say 47-year-old tourist Thomas Burns refused to leave Legends Corner bar on Broadway in downtown Nashville early Saturday evening after being bounced from the establishment. Officers say he was having trouble standing on his own and was acting erratically due to his extreme level of intoxication. As they were placing him into custody for public intoxication he began to kick at the patrol car in an attempt to avoid apprehension. He was placed in hobble restraints and transported to booking.

Thomas J. Burns, Jr., was booked into the Metro Nashville Jail on March 12th, charged with public intoxication and resisting arrest. A commissioner set his bond at $1,100 and he was given pre-trial release to his 2001 Ride Ave address in New Kensington, PA.