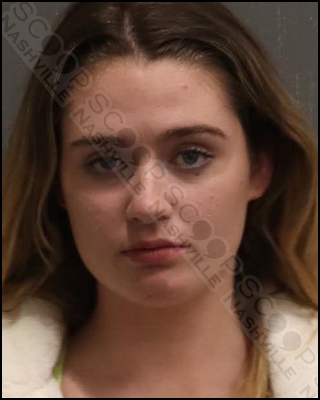 Police say 21-year-old Audrey Bradley was swerving while driving a silver SUV in the roundabout near Vanderbilt University Medical Center just after midnight. As an officer initiated a traffic stop, Bradly pulled over and stumbled out of her vehicle before the officer was even getting out of his vehicle. Using slurred words, and exaggerated arm and hand movements, she reportedly admitted to consuming three glasses of wine in the half-hour just before driving. She blew a 0.178% BAC on a breathalyzer.

Audrey Catherine Bradley was booked into the Metro Nashville Jail on March 20th, charged with driving under the influence (DUI). A commissioner set her bond at $1,000 and she was given pre-trial release to her 818 19th Ave S. address in Nashville.