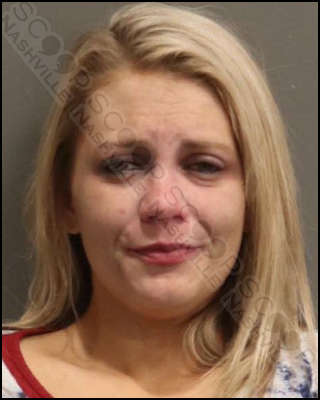 27-year-old Madison Grubbs came all the way to Nashville for a girls’ weekend and ended up in a Nashville jail cell. At 1 a.m. Sunday, officers were dispatched to the Moxy Hotel in downtown Nashville where they located Grubbs, who was extremely intoxicated and unable to care for herself. Officers had an ambulance respond to the scene to care for her, however, she refused medical assistance, which would have avoided jail. With no other options, police then took her into custody for public intoxication – a charge which would have disappeared in a few hours when she sobered up. Grubbs was going easy, though. While being escorted to a patrol car, she began fighting and kicking in an attempt to break free from custody. When Officer Brenna Hosey (one of the ‘Nashville Six’) attempted to search her prior to being placed in the transport car, Grubbs intentionally spit on Hosey.

Madison Taylor Grubbs was booked into the Metro Nashville Jail on March 20th, charged with assault of an officer, public intoxication, and resisting arrest. A commissioner set her bond at $1,250 and she was given pre-trial release to her 3716 Hwy 48 address in Liberty, MS.