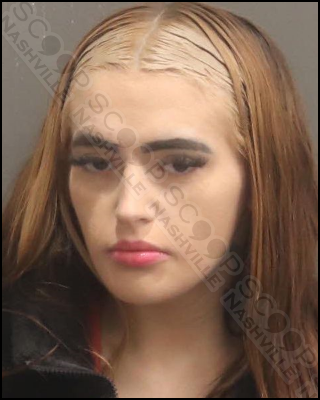 20-year-old Hannah Forkum was arrested Thursday on a multitude of charges, including auto theft. As Metro Nashville Police Officer Tony Minsing took her into custody, he says he searched her waistband, but not her upper back area. That mistake meant the Ruger LCP .380 she had strapped to the middle of her back wasn’t found, and he cuffed her hands directly below it and placed her into the patrol car for transport to DCSO for booking. When staff at the Sheriff’s office were processing her for booking they discovered the gun strapped to the middle of her back. In addition to her other charges, she now faces a felony charge of introducing a firearm into a penal institution. Disciplinary action is pending against Officer Tony Minsing.

Hannah L. Forkum was booked into the Metro Nashville Jail on March 24th, charged with five failure to appear/capias warrants, criminal impersonation (she lied and said her name was Talia Thorpe), auto theft, and bringing a firearm into a penal institution. A commissioner set her bond at $75,000.