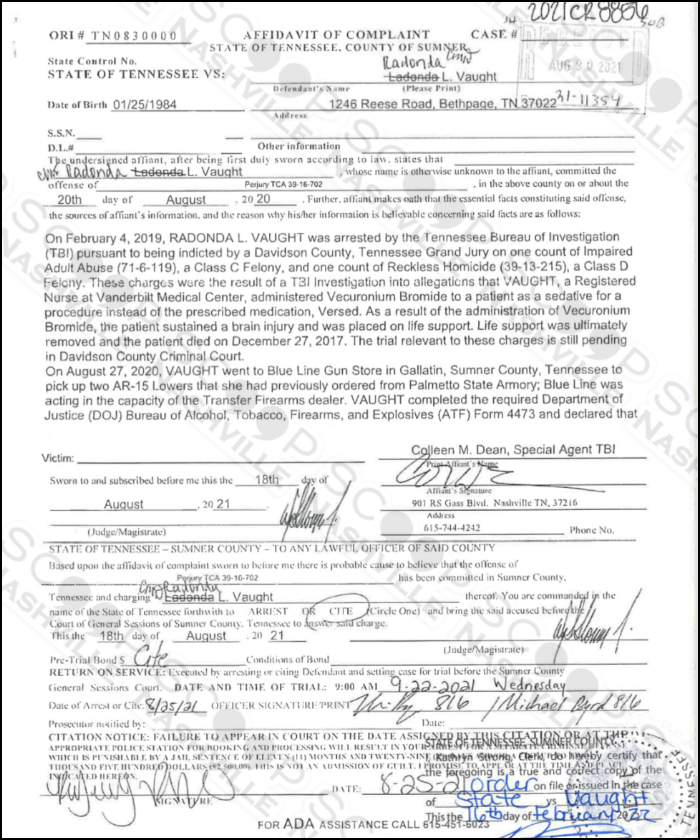 Now that disgraced Vanderbilt Nurse Radonda Vaught has been found guilty of criminally negligent homicide and gross neglect of an impaired adult for her actions responsible for a patient’s death, she must still face a perjury charge related to a gun store purchase while awaiting trial in the homicide case. In materials that prosecutors from the District Attorney’s Office were prepared to use had Vaught taken the stand is a copy of an affidavit charging Vaught with lying to the government once before. The Jury would have heard how she attempted to pick up two AR-15 Lower Receivers from a local gun store, swearing she wasn’t under any felony indictments – despite being arrested and booked on a felony reckless homicide indictment months earlier, for which she was currently out on bond. Once caught, she would admit she had “some court stuff going on”, downplaying the felony reckless homicide indictment she was facing.

The indictment states that in February of 2019, Vaught was arrested and charged with reckless homicide. While out on bond for this charge, she went to Blue Line Gun Store in Gallatin in August of 2020 to pick up two AR-15 Lowers. She signed form 4473 stating she was NOT under any felony indictment or related charge. TBI denied the sale due to her felony indictment. She would later call the store and admit she “had some court stuff going on”, in an attempt to explain why she was denied.