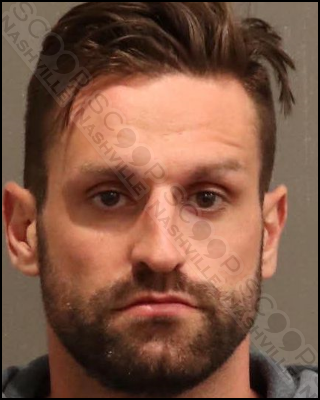 28-year-old Ryan Taugher was driving a blue Mercedes in North Nashville Friday and parked at the Chipotle on Rosa L. Parks Blvd when police encountered the vehicle, parked partially in the striped handicapped area. Officers approached the car and Taugher stated he was waiting for his order. He admitted to drinking “3 or 4 mimosas” earlier, and police say he reeked of alcohol. He refused all testing and was transported to booking, charged with DUI.

Ryan Taugher was booked into the Metro Nashville Jail on March 25th, charged with driving under the influence (DUI) and violation of the implied consent law. A commissioner set his bond at $1,500 and he was given pre-trial release to his 1116 2nd Ave S. address in Nashville.