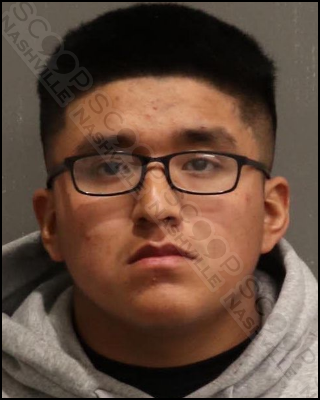 20-year-old Daunte Lalio was attempting to turn into head-on traffic on a one-way street in downtown Nashville just before 1 a.m. Sunday when a traffic officer blew his whistle, alerting him. He immediately reversed the vehicle and stopped. Officers approached the vehicle, and immediately observed him to be confused and intoxicated. He eventually admitted to being intoxicated and then urinated on himself while waiting on a blood draw at Metro General. His car was towed to the impound lot. He deleted his secondary IG account after being released from jail, which documented his underage drinking activities of the evening, but not before Scoop: Nashville archived it prior to his release.

Daunte Roland Lalio was booked into the Metro Nashville Jail on March 27th, charged with driving under the influence (DUI). A commissioner set his bond at $1,000 and he was given pre-trial release to his 441 Needmore Road address in Clarksville, TN.