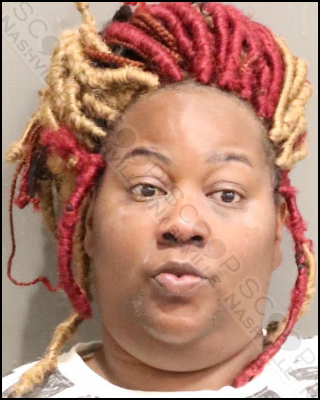 Police say 36-year-old Aisha Williams was trespassing at a retirement community in Madison on Friday and when she refused to leave they attempted to place her under arrest as she was recording them. They claim she “chest bumped” an officer, rolled up her sleeves, assumed an aggressive fighting stance, and stated: “I am about that honey, believe me, I am about that!!” She continued to aggress toward officers and pull her hands away from being cuffed until she was tased into compliance.

Aisha Denielle Williams was booked into the Metro Nashville Jail, charged with resisting arrest, criminal trespass, disorderly conduct, and assault of an officer. A commissioner set her bond at $3,000 and she was given pre-trial release to her 308 Anna Court address in Nashville.