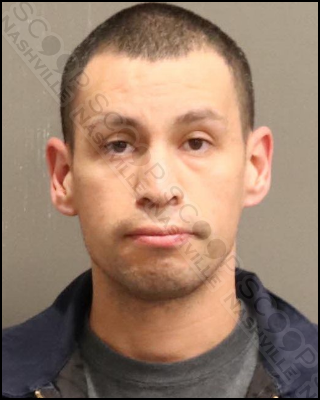 Just before 4 a.m. Saturday, police were dispatched to the train tracks near Vaughns Gap Road and Hwy 100, where 36-year-old Arick Guzman had driven his white Dodge Journey SUV onto the tracks. He was located outside the vehicle, barely able to stand and with slurred speech. He told officers he had just left a friend’s house and denied drinking any alcohol. He performed poorly on field sobriety tests and refused all other testing.

Arick J. Guzman was booked into the Metro Nashville Jail on April 2nd, charged with driving under the influence (DUI), and violation of the implied consent law. A commissioner set his bond at $1,500 and he was given pre-trial release to his 2198 Sams Creed Road address in Nashville.