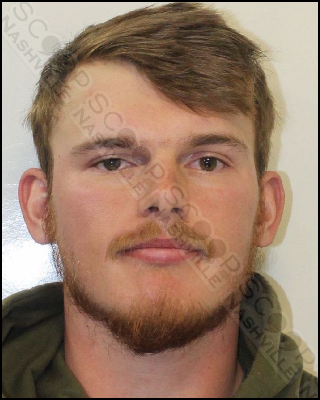 Downtown officers were alerted to a man drinking at Jason Aldean’s Bar on Broadway who was in possession of a handgun inside the bar. Police arrived and located 21-year-old Michael Hoskins, from Leitchfield, KY, who admitted he was both drinking and carrying his firearm. He was described as smelling of alcohol, and with slurred speech while being unsteady on his feet. Hoskins was taken into custody and transported to booking.

Michael W. Hoskins was booked into the Metro Nashville Jail on April 2nd, charged with possession of a firearm inside a bar. A commissioner set his bond at $1,500 and he was given pre-trial release to his 129 Thomas Drive address in Leitchfield, KY.