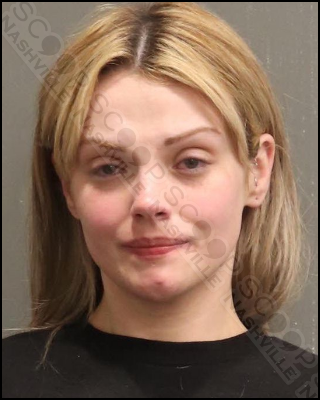 Jonathon Ballard was driving himself and his wife, 34-year-old Lindsay-Ray Christine Millard, home after being out at multiple bars on April 20th, when he says she “lashed out” after being triggered by an event from earlier in the night and violently attacked him at an intersection. Polie documented injuries to include multiple cuts and dried blood on the victim. The investigation also revealed she had an outstanding warrant for violating an active order of protection from sending him an email in February after being served.

Lindsay-Ray Christine Millard was booked into the Metro Nashville Jail on April 20th, charged with violating an order of protection and domestic assault with bodily injury. She is free on a $2,000 bond to her 5513 Fairhaven Drive address in Nashville.