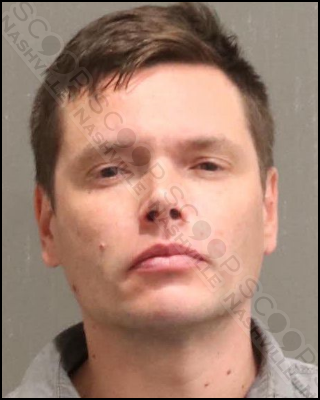 You’ve seen their commercials on every media outlet in town… the father and son duo touting “Walker & Walker Disability Law“. Overnight, you can now see their character behind those suits, as son Johnny Walker reminded officers he was an attorney on multiple occasions during a DUI traffic crash with a car full of open containers, and that his father was former state Senator (and famed disability lawyer) Mike Walker – and repeatedly implied his father would make sure the MNPD officers lost their jobs for not immediately allowing him to call his wife during his arrest.

36-year-old Nashville Attorney John (Johnny) Walker was in a traffic crash in downtown Nashville, and police observed signs of alcohol impairment as they arrived at the scene. He was reportedly so intoxicated he was unable to even complete the standard field sobriety tests or remain standing. Several open containers of alcohol were located in the vehicle with him. During the interaction, he continued to remind responding officers he was an attorney, his father was also an attorney, and a former State Senator (Mike Walker), and that he wasn’t allowed to immediately phone his wife, he would have their jobs. He is free on a $2,000 bond, and likely quite the bruised ego.

John Walker was booked into the Metro Nashville Jail on April 22nd, charged with driving under the influence (DUI), and violation of the implied consent law. He is free on a $2,000 bond to his 1803 Broadway address in Nashville.